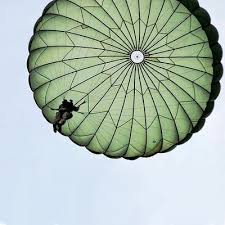 I Packed Your Parachute

After 74 successful combat missions, Charles Plumb, a Naval Academy graduate, and a US Navy jet pilot during the Vietnam era, was forced to eject from his plane, as it was hit and destroyed by a surface-to-air missile.  He parachuted into enemy hands, was captured and imprisoned for 2,103 days living in a small box-like cell, where he was tortured by the communist Vietnamese. Amazingly, he survived the ordeal to be able to share this story:

Plumb and his wife were sitting in a restaurant soon after his release and return to the States, and a man at another table stopped and said, “You’re Plumb! You flew fighter jets in Vietnam from the aircraft carrier Kitty Hawk. You were shot down!”  “How in the world did you know that?’” asked Plumb. “I packed your parachute,” the man replied.  Plumb gasped in surprise and gratitude.  The man pumped his hand and said, “I guess it worked!” Plumb assured him, “It sure did. If your chute hadn’t worked, I wouldn’t be here today.”

That night Plumb couldn’t sleep for thinking about the earlier encounter with the man at the restaurant, and how his words had been so impactful.  Plumb says, “I kept wondering what he had looked like in a Navy uniform: a white hat; a bib in the back; and bell-bottom trousers.  I wonder how many times I might have seen him and not even said ‘Good morning, how are you?’ or anything because, you see, I was a fighter pilot and he was just a sailor.”

Plumb thought of the many hours the sailor had spent at a long wooden table in the bowels of the ship, carefully weaving the shrouds and folding the silks of each chute, holding in his hands each time the fate of someone he didn’t know.  Plumb pointed out that he needed many kinds of parachutes whenever his plane was shot down over enemy territory—he needed the actual physical parachute, his mental parachute, his emotional parachute, and his spiritual parachute in order to just survive.

So many lessons can be learned from that true story—gratitude, acknowledgment and teamwork—to name a few.  Teamwork—the combined action of a group of people, especially when effective and efficient—a word that is so meaningful in all aspects of life, but, in reality, is so hard to achieve.  Just as there are many parts to our body, we still have only one body.  The eye can never say to the hand that it is not needed, and neither can the head say to the feet they are unnecessary.  Those parts that may seem the weakest and of the least importance, are often the most necessary, just like the sailor who packed the parachute for Charles Plumb, the fighter jet pilot, to carry with him on that fated 75th flight.

Whose Parachute Are You Packing?

This is a great reminder that, individually, each of you are important members and play a vital role at work, at home, at your place of worship, and in other areas of your life.  Without your individual contributions, everyone is weakened.  You may never know how your actions will effect others—even their well-being.  So, not only ask yourself the question of “Who’s packing my parachute?” but, more importantly, ask yourself the question, “Whose parachute am I packing?”