The laughter of children at play, the monotonous whirring of an outside sprinkler, the droning of a distant lawn mower, and the soft hum of honey bees at work, are all quiet now and put to bed, as the long summer day recedes into a soft blanket of warm darkness.  The melodious sounds of summer begin their nighttime concert, while I sit and breathe in the heady fragrance of the evening air, which has an effect of slowing down the pace from the frenetic energy of the day. 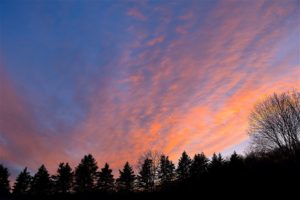 Gazing at my pine trees silhouetted in the waning light, reminds me of tall soldiers standing at attention.  In contrast, the willow branches idly droop down as if to kiss the pond, as they brush over the surface of the water being blown by the gentle breeze.  The moon, just a pale sliver hanging over the treetops, does not offer much in the way of light for me to see the reason for the rustling I heard in the woods, but perhaps it was just a murmur from a breath of air meandering through the tree leaves.

The cacophony of sound created by summertime’s evening orchestra and choir—the “zing-zing-zing” of the Cicadas; the perfectly spaced “clicks” of thousands of crickets, crescendoing into a long trill; the late-night song of Katydids; joined with the frantic mating sounds of frogs and toads, along with a random call from a night bird—is almost loud enough to be deafening.  Instead, I find it to be soothing and comforting as I sit there listening, washing my mind from the stresses of the day.

There is no doubt that the lazy days of summer have arrived when I am able to hear the deep resonating sound of my resident bull frogs, and the plethora of their other frog friends joining in the melee to see who can sing the loudest.  Their voices remind me of the metallic sound of a banjo or of a smooth guitar, complimented with flute-like sounds, flanked with other choir members who offer a reverberating low snoring noise, and, of course, there are also the bass singers, to round it off.

All in all, the summertime choir—the singing insects, frogs, toads, and nighttime birds—combine their voices to create a nightly original musical cantata of monumental proportions in what I call the “Song of A Summer Night.” 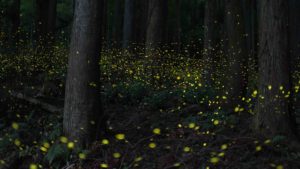 This nightly song provides a beautiful musical chorus sung as if it is a tribute to the twinkling fairy dust sprinkled down from the heavens—the galaxy of fireflies dazzling the night with their magical flashes of light, performing their beautiful dance, just as butterflies do during the day—fliting here and there—in sync with the sounds of nature.

They offer thousands of silent sparks on their star-studded stage and electrify the summer night with their iridescent glimmers of yellow, white, red, and green.  They leave trails of star dust illuminated by their blaze of light as they make their trek upwards, then continue their fiery display as they plummet downwards toward the earth.

They appear to be miniature falling stars and create an illusion of tiny threads of connecting lights miraculously suspended in mid-air, then seem to drizzle and spiral their light downwards like a fireworks display.

What Kind of World Would It Be…?

I sit in peaceful silence in the darkness at Cheema’s Landing, almost feeling like an intruder amidst Mother Nature’s magnificent performance of choregraphed light, music, and dance.  Watching the illuminated and glittering fireflies dance in complete syncopated harmony with all the collective voices of nature’s choir singing out their latest rendition of a “Song of A Summer Night,” I am thankful to bear witness to it all. 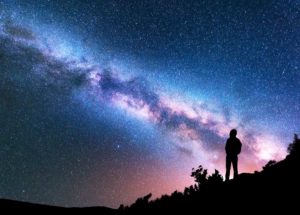 Reflectively, I wonder what kind of world it would be if we were more like the fireflies—a world where we would spend our energy emitting a soothing peaceful beacon of light to those around us.  What a wonderful world that would be!

Perhaps we all need to stop and enjoy a bit of nature’s nighttime show, by slowing down and calmly listening to the latest version of the “Song of a Summer Night” being sung from your very own back yard.  Why not give it a try?