Have you ever wondered how an aircraft is moved when the engine is off to be placed inside of a hangar? Most would assume that they would be driven to where they are parked, but this is not always true. Traditionally, to move an aircraft you must have a tug that will allow a tow bar to be attached to it. Moving a piece of equipment with a tow bar and tug has always been the industry standard, but recent innovations could make this action more efficient.

We would like to introduce you to Grand Aire’s newest piece of equipment, the Mototok M528. This product is a state-of-the-art tug that enables anyone to effortlessly tow an aircraft via wireless remote control. This addition to our FBO has been a huge advantage to our company and here’s a few reasons why. 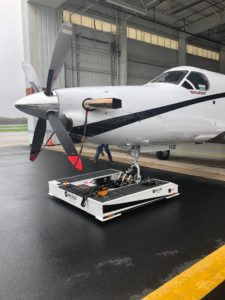 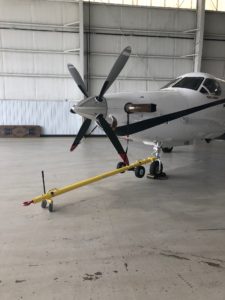 Maneuvering an aircraft with a tow bar comes with difficulties, one being turning. To turn 90 degrees with a tow bar requires a lot of space and caution. You must be moving forward or backward in order to turn directions while utilizing a tug and tow bar. With the Mototok the aircraft does not need to be moving at all in order for it to change directions. The Mototok changes directions through different rotating speeds of two independent processor-controlled wheel-hub motors. One motor rotates forward and the other motor rotates backward to easily change directions of where it will go. Because it is so easy to move to the exact location you want, the Mototok can add up to 40% more space in your hangar. See the images below of an example of how the turn radius is improved and how hangar space is optimized. 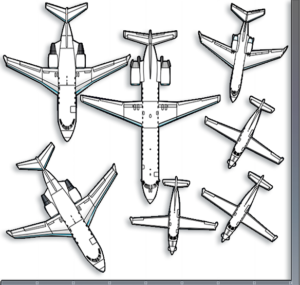 Traditionally when properly moving an aircraft it is a multiple person job, one person driving and steering the tug and at least one other person ensuring that there is no collision with any surrounding objects, this is what the industry has come to call a “wing walker.” With Mototok there is no need for a wing walker when towing because it has an enhanced remote control unit. This remote control unit allows you to pilot the tug wirelessly, so that you will be able to walk around the aircraft, essentially becoming your own wing walker. This is a huge advantage because not only can you now get the job done with only one person, but it also cuts down the percentage of collision accidents that may happen.

Being able to implement this piece of equipment into our procedure of towing has been a tremendous upgrade for Grand Aire. The Mototok is completely maintenance free, eco-friendly and to top it all off it has won the 2019 Product Leader of the Year Award by Aviation Pros Magazine. Although we cannot use this piece of equipment all of the time due to weather or it not being compatible with certain aircraft, we have been able to utilize it for 25% or more of our total aircraft re-positions.

If and when you are flying into Grand Aire be sure to ask the line service technician to see the Mototok in action if it is not already towing your aircraft. We are open 24/7/365 for any of your FBO needs and can be reached any time at 1-800-704-7263 or email us at FBO-Lineservice@GrandAire.com.