With Memorial Day in another week, here is a harrowing tale involving military aircraft, two branches of the service, a native of Ohio, and unwavering heroism against all odds. 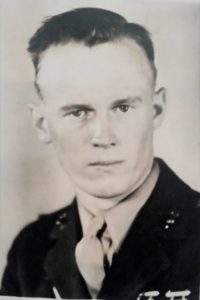 It was the talk of the town for several weeks after witnessing the unbelievable rescue of a 23-year-old Second Lieutenant Marine parachutist from Akron, Ohio, Walter Osipoff, a jumpmaster.  It all began the morning of May 15, 1941, (almost 80 years ago) which was a calm and beautiful day over the glistening waters of the San Diego Bay, close to the North Island Naval Base.  Osipoff was involved in a routine training jump from a Marine Corps DC-2 aircraft (known as a R2D-1) that nearly cost him his life.

Osipoff’s mission was to supervise the practice jumps of his 12 men, along with performing the maneuver of parachuting canvas cylinders containing ammunition and rifles.  After nine of the men had already jumped, Osipoff started to toss out the last cargo container, but his own automatic parachute release cord became entangled with the cylinder, ripping his parachute open, and suddenly jerking him out of the plane!  He impacted the plane with such force it ripped a 2.5’ gash in its aluminum fuselage.

With the parachute wrapping itself around the tail wheel, Osipoff was dangling upside-down by one leg 12’ under the plane, and 100’ behind the tail.  He was attached by only 4 of the 24 parachute lines, which kept him from plummeting to his sure death.  Spinning like a whirly-gig in a hurricane, he tried to keep himself positioned in a ball with his eyes tightly shut against the wind blast, as the pummeling shroud lines burned and lacerated his face and body, while he bounced back and forth.

The Blow of a Hammer 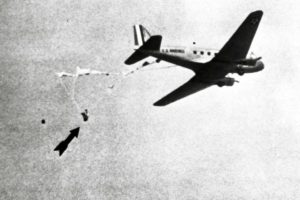 In the meantime, how could things get worse?  Pilot Harold Johnson knew there was bad trouble whenever he felt the blow of a hammer against his solar plexus.  This was from the control wheel which slammed into his body from Osipoff’s weight hanging from the tail. Fighting the controls, as the nose of the plane wanted to ascend, he needed every ounce of strength to push the nose down, level off the plane, and keep it level and straight.

Finally, he realized he was dragging Osipoff but had no radio with which to call for help.  Flying as slowly as he could manage, while wheezing and fighting to control the airplane, he was low on fuel too, but knowing full well that if he landed the plane, it would be certain death for Osipoff. Inside the aircraft, the remaining men were frantically, but futilely, trying to figure out how to pull Osipoff back into the aircraft, but having no parachutes themselves, they were at risk of the same fate.

Keep the Spinning Prop Away from His Head

While below on the ground at the naval air station, Lieutenant William Lowrey happened to glance up to see what he thought was a test being conducted with a parachute dummy, but he quickly realized it was not a dummy that was dangling from the R2D—it was a man!  With lightning speed, he and fellow test pilot, John McCants, took off in a Curtiss SOC observation-scout bi-plane (that had no radio either) to attempt a rescue. 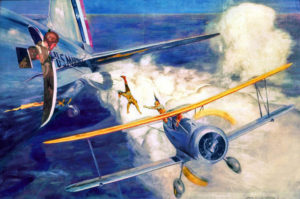 Several passes were made to precisely maneuver the biplane underneath Osipoff, while trying to keep the spinning prop away from his head, but the SOC was flung into the transport plane’s airstream and twice dragged Osipoff across the wing.  Signaling Lowrey, the soaked-in- sweat transport pilot, to go up to calmer air, with only a mere 10 minutes of fuel remaining, while Osipoff’s helmet dripped blood—McCants stood in the rear cockpit of the SOC after Lowrey got lined up so McCants could try and grab ahold of him.

McCants and Osipoff were able to grasp each other, but there was no room in the small cockpit for both men, so Osipoff managed to lay on top of the fuselage and hang on to McCants.  McCants worked hard at cutting the shroud lines that continued to hold Osipoff but keeping the two planes in position was just about an impossible feat despite the best efforts of both pilots, Lowery and Johnson.

It is said they were guided by angels whenever a gust of wind blew the SOC’s nose up, the shroud lines then fell across its upper wing, causing the propeller to neatly sever them.  Simultaneously, the SOC collided with the R2D and severed 12” off the R2D’s tailcone fairing, as the parachute billowed back and caught in the SOC’s tail, jamming the biplane’s rudder.  Osipoff hung on for dear life!

Suddenly, the SOC and Osipoff were free from the R2D!

Johnson was then able to land the R2D safely back at the naval air station without running out of fuel, despite the partially severed tailcone, but Lowrey was in trouble with the SOC’s loss of rudder control.  Miraculously, with McCants and Osipoff still hanging onto each other, along with the added weight of another person in a two person aircraft, and the loss of rudder control, Lowrey managed to maneuver the plane and safely touch down on the runway defying all odds.  You can well imagine the wild applause they received from their ecstatic fellow servicemen upon their touchdown, who had gathered to witness this miracle in midair.

After spending six months in the hospital, Osipoff was promoted to First Lieutenant, but ultimately earned the rank of Lieutenant Colonel prior to ending his military career in 1948.  Both Lowrey and McCants were granted the “Distinguished Flying Cross” for their “extraordinary heroism…in one of the most brilliant and daring rescues within the annals of our Naval history.” 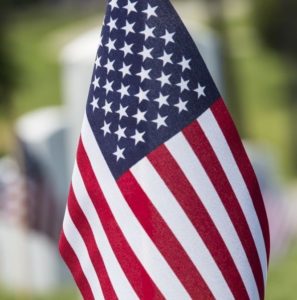 What a story! This remains one of the most daring feats in aeronautical history almost 80 years later.   Truman said it best, “Our debt to the heroic men and valiant women in the service of our country can never be repaid. They have earned our undying gratitude. America will never forget their sacrifices.”

When celebrating Memorial Day, remember its true meaning.  Do not let it just be about good times and festivities but take time to reflect on the true heroes of our great country.  Raise your glass in grateful acknowledgment for the ultimate sacrifices our nation’s finest brave men and women have given to ensure our continuing freedoms! Never ever forget!