Standing outside at Grand Aire, I watch as a pair of the 180th Fighter Wing’s (Ohio Air National Guard’s) sleek F16s glide past me on the taxiway, glistening in the early morning sunlight, while I 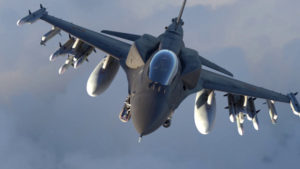 wait in anticipation for them to “turn and burn…”  As the lead aircraft makes a precise turn smartly positioning itself onto the runway, I notice its over sized air intake, along with its strategically positioned ordinances and guns, which leaves no room to doubt its purpose in the military.

I watch it suddenly jet off into the wild blue yonder with the afterburners fully lit, shaking all the surroundings with its thunderous departure, and rattling everything in me down to my very core.  In a couple of seconds, it is gone from sight, but is closely followed by plane #2, the wingman.

The delayed deafening sound of the absolute raw power of the plane’s single engine moves me to near tears, despite it being a daily occurrence at the Toledo Express Airport—home to both the 180th and Grand Aire.  Just knowing the sheer magnitude of the plane’s capabilities, the skill level of the brave single pilot tasked with flying its missions, and what he or she had to accomplish in order to qualify to sit in that rocket propelled seat, is so humbling to me—not to mention the great risk he or she takes on a daily basis in just doing his or her job.  I feel overwhelmingly blessed in that moment to have again witnessed such a sight.

An Office with a View

My thoughts immediately turn to my oldest son, Shaun, who is currently stationed in Belgium, while serving in the US Air Force.  Wandering into my office to start my day, while sipping on a steaming cup of coffee, I settle in comfortably at my desk, positioned such that I can overlook the ramp and runway safely from my ground level windows.  As I look around at my surroundings, I reflect on the differences in Shaun’s working “office” compared to my office.

“His office”—the U.S. Air Force F16 Viper—is a flying weapons platform and is quite different than mine, which consists of the usual desk, chairs, and filing cabinets.  His compact “office” (49’ x 33’ x 16’) touting a maximum gross take-off weight of over 42,000 pounds, comes fully equipped with all the latest amenities in the form of high level armaments, and state of the art avionics and navigational equipment.  Literally, it is as if he straps “his office”—the plane—onto his body, as they are inseparable during their day together.

The window to his world is a clear bubble canopy, allowing for complete all around visibility, and his personalized custom fitted helmet, costing about $125,000, far surpasses any reading or 3-D glasses I have ever had the opportunity to wear.  He explained he can even see a license plate on a vehicle situated on the ground while flying high above at safe altitudes.

In his mobile “office,” he can reach unbelievable heights of 50,000 feet or more, or can fly so low he could trim off treetops as he flashes past…so low that you could probably see the white of his eyes, if you were quick enough and he had his visor up.  He can comfortably cruise along at a mere 1500 mph (or Mach 2), and, yes, he breaks the sound barrier weekly.  If needed, the plane can pull up to 9 times the force of gravity, as it is highly maneuverable being used in air-to-air and air-to-surface attacks.  He has been all over the world in “his office,” on so many deployments and missions, training exercises, and international air shows, and, whenever possible, I have trailed along after him.

Given a once in a lifetime opportunity during his training at Luke Air Force Base, I was able to fly a F16 simulator of which was a complete blast in every sense of the word!  I know of no other civilian, especially a woman, who can lay claim to such a feat! I say that I flew it, but I am certain that description is debatable!  Being arc welded into that tight seat, I felt as if I was completely enveloped by the cockpit, with all of its gadgets, levers, lights, buttons, gauges, handles, pedals, and the “magical throttle.”  I was truly one with the plane! (or so I thought…:)

“You’re going to crash!  You’re going to crash!” as horns, bells, and whistles were sounding their alarms, with me in a state of complete shock and awe at flying at such speeds while continually using the afterburners, with the world whizzing past me below.  At that moment, I did not care what they were saying, but little did I know that in continuing to use the afterburners I would quickly use up all my fuel and would ultimately crash the simulator!  “It was worth it!” I excitedly exclaimed to my son, while he stood there looking at me and shaking his head in disbelief.

They had to peel me out of the simulator, as I just wanted to stay and play all afternoon long!  It makes me giggle even now at that feeling of utter excitement, and I cannot hear Steppenwolf’s song, Magic Carpet Ride, without it reminding me of my son, of F16s, and that fun time in the simulator.

While my little adventure in the simulator is not even a blimp on his radar of life, Kash, the call sign given him by his Air Force F16 peers, has given me insight into a world most would never see or 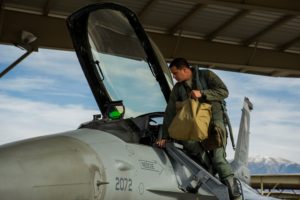 even begin to experience.  Having the privilege to actually be on the flight line at the Royal International Air Tattoo held at RAF Fairford in Gloucestershire, UK,  last summer, I was able to see him climb the ladder to “his office” and settle into his seat, which I think must be as comfortable to him as my reclining desk chair is to me.

Watching him lower the aircraft canopy, while he continually looked at gauges and flipped switches, I realized that is as routine to him as me clicking my mouse to respond to an email.  His uniform, the “green bag” he barely notices and wears with such ease, is an eye catcher to us civilians and certainly makes a statement.

All the hand signals and back and forth conversation with his Crew Chief to start the engine is so routine to him that he knows every move before it happens.  The sensation, the vibration, and the sound of the powerful engine must be as soothing to him as is the overhead music playing to us in our building. “His office” is like a familiar old friend to whom he is always happy to see and be with, but to whom he always treats with a reverential respect.  The F16 is as just a part of him as is his own heartbeat.

While all of us on the ground hovered and braced ourselves against the force of the jet blast, he happily turned to taxi off to start his performance in the air show, being quite aware of the pummeling gale force winds he was leaving in his wake.  What a rush!

I learned so many things that day in England, including that the mood and personality of the F16 can certainly go from one of eloquence, as if it is in a graceful dance, to one that is fast, furious, demanding, and full of anger.  I was amazed by that revelation.

You bet I am so proud of him I could just bust at times!  The life of a fighter jet pilot seems glamorous to most, but it certainly comes with its perils, great risks, and never-ending sacrifices, of which I know he has experienced many times over.

We go about our routine daily lives sitting in our comfortable offices and homes giving little thought to the enormous significance of the upcoming 4th of July holiday celebration.  It is never top of mind to think about the far-reaching global presence of our combined military, whose sworn task is to ensure our continuing safety and freedoms.  Rarely do we look up and acknowledge the watchful eyes of our Air Force flying high overhead all around the world, who—just by their formidable overhead presence—can deter conflict. 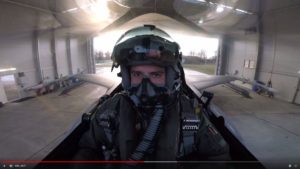 Look up!  Look around! Thank our servicemen and women for all they do!

My son, Shaun—Kash—is a pair of those eyes watching from overhead, and while drawing beautiful contrails in the sky in “his office” with his old friend, the F16, he remains ready and on target for the next critical mission ahead. I certainly pray the knowing eyes of God looks over him and all our military, keeping them always safe and free from harm! Thank God for them all!