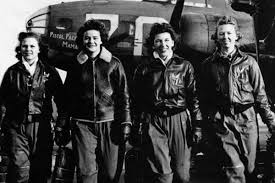 As every available man of age was sent overseas to fight in Allied efforts in the Europe and Pacific theaters during WWII, the U.S. government sent letters inviting all females, holding a pilot’s license, to join the war effort.  U.S. aircraft manufacturers were pumping out military aircraft in lightning speed, all of which had to be transported to various Army Air bases across the nation. With no male pilots left to ferry these planes, the WASP program was born in 1943.

These women, all with diverse backgrounds, but all possessing a fierce love for country, for aviation, and the love of flying, eagerly chose to accept the invitation to be an integral part of the war cause.  They left college, secretarial jobs, retail positions, teaching, stenography, and other types of jobs females held during that era, and despite their diversity, their hearts were united in their desire to help win the war! They were going to do their part by flying for their country!

Although the WASP program was treated like it was a part of the military, they were officially given “civilian status.”   To become a WASP, each female had to undergo rigorous testing, bootcamp, and other Cadet like activities, and graduated after the 27-week program, having earned their coveted silver wings, while stationed at Avenger Field in Sweetwater, Texas.  These Avenger Girls (as they called themselves) lived in barracks, had inspections, wore flight uniforms, marched, studied weather, navigation, physics, math, aircraft specifics, engines, mechanics, flight instruction in primary, basic and advanced aircraft, and were well equipped to fly all military aircraft of that time, and they did just that!  1,074 of these fearless female flyers flew long cross-country flights in order to supply aircraft to the military bases as quickly as possible, which were then used in training and combat.  They ferried a total of about 12,000 aircraft within the U.S., and each WASP logged large amounts of flying time!

Although the primary mission of the WASPs was to ferry airplanes from the factory to the various Army Air bases, they provided other crucial services as well.  They acted as flight instructors to male pilots, they flight tested all types of military aircraft, as well as they served as tow target squadrons, along with many other jobs.  Being a tow target squadron meant they would fly their plane with a canvas gunnery target attached to the back for male students to practice combat, of which they would literally fire ammunition at the canvas target being towed by the WASP aircraft.

These women were certainly a smart, gutsy and brave group, easily handling aircraft ranging from B-17s to B-26s to the B-29 Super Fortress, as well as PT-19s, P-40, P-51s, P-63s, C-47s, C-60s—and flew every aircraft in the Army’s WWII arsenal.  It is amazing to me as many air shows that I have attended, I have never heard the story of the WASPs, and how they were probably the initial pilot to embark on the maiden voyage of many of these WWII aircraft, being ferried from the factory to the base.  I am so proud of them all!

Sadly, 38 WASPs died while performing these missions for our country.  They were not given a military funeral, and, in fact, their remains were not even shipped home to their families by the government.  Given the civilian status of the WASP program, the military took no responsibility for them, and no WASP had ever even received medical care or insurance benefits during their tenure with the program.  The group collected enough money, with each fallen sister, in order to send her remains back to her family.  They were not granted the status of being buried with military honors, or with an American flag draped over their coffins, let alone given the respect or monetary compensation they so richly deserved.  There were no “Gold Stars” in the windows of these families for their daughters having died for her country…

De-Activation of the WASP

Instead of the government granting full military service for the WASPs, which was the expected outcome, the program was cancelled just 8 months prior to the end of the war, shocking everyone involved.  This occurred after a letter writing campaign to Congress from disgruntled male pilots, who complained that women were taking their jobs, and who also did not want to get drafted and shipped overseas.  Congress then voted “no” to give the WASP program military status, and, consequently, it was disbanded on December 20, 1944. They were sent home with no recognition whatsoever, as well as they were not even given money to travel back home.

After the WASPs were disbanded, they all went their separate ways and tried to start a new life.  They were invited to join the Women in the Air Force (WAF), but would no longer be allowed to fly military aircraft, despite their absolute proven ability to do so.  One went on to become an Air Traffic Controller, others became stewardesses, or general aviation flight instructors, but some just quit flying altogether, choosing to do something completely different.  How disheartening it was that they could no longer continue with a military flying career after contributing so much!  I pause and wonder how different things would have been for them, and would be for us now, had they been allowed to pursue their career as a pilot for the Army Air Force.

A long 30+ year campaign was waged by those remaining WASPs for the government to recognize and fully militarize the WASP program.  Finally, in 1977, their battle was won whenever a law was enacted by Congress issuing veteran status to these women.  This came only a year after the U.S. Air Force accepted women, in 1976, into its pilot training program granting females equal terms with their male counterparts.

There are now approximately 65,000 female pilots serving our country, who have followed on the contrails of the “Avenger Girls”—those pioneer female aviators, who fiercely blazed the trail for all women aspiring to become a military pilot.  These 1,074 women answered the call to use their best talent in a time of need, (and during a controversial period for women in the workplace, especially in aviation) by doing what was asked of them for a country they loved!  Join me in saluting America’s “Original Fly Girls—the WASPs”—for the heroes they truly are!